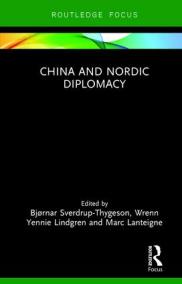 Published this week by Routledge: China and Nordic Diplomacy, co-edited by Bjørnar Sverdrup-Thygeson, Wrenn Yennie Lindgren and myself. This book examines the distinct relations between China and the five Nordic states, including in the areas of Arctic engagement.

Each of the ‘Nordic Five’ countries has had different historical experiences with China diplomacy. However, under the government of President Xi Jinping, Beijing has deepened its relations in Northern Europe, including expanding trade and investment, and raising the possibility of future engagement via China’s ‘Belt and Road’ initiative. Chapters include case studies of all five Nordic states, as well as comparisons with the European Union and the possibility of a ‘5+1′ diplomatic relationship between the Nordics and China, (echoing that of the existing ’16+1’ dialogues between Beijing and Central and Eastern European States), in the near future.

This book extensively covers Arctic affairs, including Chinese diplomacy in the region as Beijing sought to be viewed as a ‘near-Arctic state‘, including joining the Arctic Council as a formal observer in 2013, and participating in scientific, economic and diplomatic enterprises in the circumpolar north.